Track in the garden

About me and my hobby 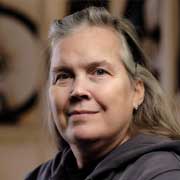 My name is Chiara-Vibeke Runge, I now live in beautiful North Rhine-Westphalia, I am married and my hobbies are modeling, cycling, computer, music and tennis.
Born as a child of the 60s, I grew up well protected in Germany and Norway and was always supported by my parents in my confused and wild thoughts.

After school and university I lived and worked in Sweden for a few years. Since a few years, also by discovering the crawlers I am again deeply immersed in the matter.

Through a phone call with Kai-Uwe Nickel from RC-HP I got the idea to create this website and hope that I can facilitate the entry into crawling and offer experts a reference book with what can be found here. Of course, my own opinions and experiences flow here extremely with and not everyone is always the same opinion. But it is not meant as a manual but as a help. In the end, everyone will find his personal way.

The model building hobby has captivated me since my earliest childhood. During a Sunday walk with my parents, I met a few people with remote-controlled ships. At that time it was a rescue cruiser and a fire ship. I was so thrilled and constantly bugged my parents since that day. I was told that ships are not that great anyway, but planes, that would be something.
Since I had only 2 choices, airplane or NIX I decided of course for airplanes. The first model was far away from a remote controlled model ... a plane with rubber motor :-(. My enthusiasm kept massively in the fence, but I thought probably better that like nothing.

With my father, the Piper of the company Graupner was then built from balsa wood, whereby the child rather watched while the dad full of zest for action glued the good piece together and I was allowed to perform menial tasks :). At some point "my" plane was brought to a meadow for its maiden flight. The anticipation disappeared then fast as with the first flight the good piece bored itself upside down into the soil. My tears were probably so heartbreaking that mom and dad bought me my first boat. At least it could only sink.
With the part I then sailed around at home in the pool and this incurable virus "model building" penetrated deep into me.

Since the functions were quite limited and the pool with 16mx16m not necessarily called for great adventures, the enthusiasm then disappeared quite quickly at the end of the summer.
Yes until, ... until I experienced the first time flat track racers on a big parking lot. These were some with combustion engine, stank totally ingenious and made wonderful noise.
One of the men couldn't resist the girl with the big eyes and let me drive one of those.
It was over, I had fallen in love. My parents were thrilled with the news and ignored my newfound interest quite casually.

Fortunately I had a godfather, a piggy bank and the extreme persuasion, I bought my first RC car. A Graupner 2WD buggy, of course with electric motor the other was simply unaffordable and much too costly, the box was yellow it was ... too slow ... much too slow, at least in my imagination. There it was born, the will to make everything better, to tune it. I bought my first 8 min racing engine. That was really cool. after 8 min was then always all over, with 2 batteries, was with battery change, after 15 min the fun done. But nothing could shake me, it was still 2 batteries bought in absolutely insane speed, of felt a week, were loaded for a few minutes of happiness.

The E-drive era was then replaced by various burners, there came 2 combustion boats but at some point the hobby disappeared from my life, once because of the time but also because no fellow drivers were available.
A few years ago I saw a TRX4 Defender, I was thrilled and my husband melted away and this disease, which actually seemed cured, it broke through again, with full intensity and I'm looking really, really no medicine against it.

Cars and all the rest

Lately, then so some crawlers have accumulated, you can also so badly separate from his little ones.
Currently there are 4 Traxxas Defender, 2 Traxxas Blazer, 3 Traxxas Sport of which 2 with switchable diffs, a Mercedes G500, 1 Bronco 1979 and a Bronco 2021. 2 Gmade BOM with 2 speed gearbox, Gmade Komodo as a guest vehicle.
All vehicles were tuned in the area of engine (Hobbywing Axe and Fusion) and electronics (steering servos HD Power 25, Xpert 7701, Futaba HPS CB700 or TSP T73W and all switching servos HD Power TR4). Furthermore modifications to the chassis etc.
For the adrenaline kick I use a Traxxas UDR, a Slash Ultimate and an Arrma Infraction with 8S.

In the meantime, I have equipped all crawlers with controllers / motors combos from Hobbywing, once you have driven that you just do not want anything else. For radio control, I rely on the Absima CR6P and the Futaba T7PXR. The latter of course also because of the fast vehicles.

In the field of tools I rely on the quality of Arrowmax. Here I use the series Honeycomb and Black Golden.The screws makes with the tool just crazy fun. Otherwise, the micro sockets from RC4WD, which are then in the sizes where other companies really stop. Processing is functional but neither good nor beautiful, but they have helped me many times with 2mm hex nuts or smaller.

When it comes to chargers I switched from the Sky RC D400 and now rely on the ISDT K4. The reason was for me the noise, the ISDT are through the intelligent fan control many times quieter. From the ISDT K4 I have 2 pieces to shorten the charging times with 4 batteries, we are also always on the road in pairs. For mobile use, I use an ISDT K2 Air which, if necessary, comes with the external power supply ISDT SP2425 on 2x300Watt. To unload unused batteries again I use the ISDT FD-200 25A.

Why does this site exist, is this site commercial and why do I promote RC-HP almost exclusively as a store.

Crawling has become an extremely popular hobby in recent years. Even people who previously had almost nothing to do with modeling discover this hobby for themselves and their family. Also, groups on Facebook were created specifically for the TRX4 with user numbers growing daily.
What was really striking, every 3 days the same questions were asked, groups on Facebook are just not like a forum. Here it was often about the control of the lighting system on the vehicle. During a phone call with RC-HP came the idea to simply give a kind of overview of the most important questions and answers.

The idea was there and on the same day I started with the implementation of my idea. In the Facebook group, users were then asked whether they want to provide pictures of their cars. With the owner Kai of RC-HP I discussed ideas and solutions and the construction of the page was discussed in the group. Also the search for spare parts should be simplified, so there should be exploded views with direct links to a German store. We often plugged our ears together and talked about ideas and solutions that help others.

I have then decided that all links, as far as it goes, go to the store of RC-HP, because this page would never have arisen in this form without his information. His knowledge about model building in the field of cars is almost inexhaustible. Since I also deal with the topic for a long time, the right two had found each other.

Often I get the statement, well you get there also certainly a lot of money for. I have to deny that, I do this as a pure hobby and to help beginners or to offer a reference book. The fun here costs only me money, because domains and a web server are not free to operate and the whole thing takes a lot of time. In addition, my husband is also an enthusiastic crawler ... what more could a woman want.

LET'S EXPLORE THE WORLD - THERE IS SO MUCH TO DISCOVER

THANK YOU FOR VISITING MY SITE! 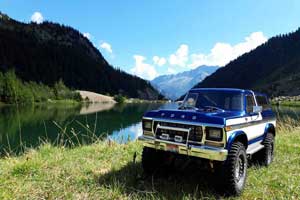